On April 29th, Mayor Bonnie Crombie of Mississauga announced on Facebook that the City Council passed a motion to “allow for the broadcasting of the evening call to prayer (azan) from local mosques and other non-residential buildings regularly used for worship during the month of Ramadan this year.” Similar motions were passed in Milton, Markam, Ottawa, and Toronto, among other cities in Canada. Within hours of Crombie’s announcement, the Mayor’s page attracted thousands of comments and hundreds of shares, a rare level of engagement. Many “liked” the announcement, but a couple of hundred users reacted negatively. Over 60% of negative responses came from Egypt’s Coptic Orthodox Christian community, a sizable diaspora in the city. “This might have just caused you [sic] your next election!” wrote one user, “Let them stream their services like all the churches did during Easter. Where was the public opinion on this?!” One of the most trending comments, it highlighted the Coptic community’s voting power in Mississauga, yet it also masked more important internal debates about religious freedom among Copts in Canada.

A petition (since taken down) quickly followed, gathering over 400,000 signatures in two days to stop Mississauga City Council’s motion. The petition was circulated heavily among Copts on social media, private messages, and WhatsApp groups. Copts even participated in a closed Facebook group looking to start a lawsuit against the city of Mississauga, citing the motion to allow the call to prayer as unconstitutional. Anti-Islamist and conservative groups also circulated the petition. Another campaign emerged against the motion in the city of Toronto and was spearheaded by a Coptic Christian. These petitions were circulating at a sensitive time; Copts in Canada also did not have access to their churches for their most venerated holiday Easter celebrations under COVID-19 lockdown. Like Muslims this Ramadan, many Copts have had to celebrate Coptic Easter without family gatherings or worship services. During Holy Week, many Copts spent extended hours a day praying and socializing in online meetings on Zoom and social media broadcasts. Many comments on the Mayor’s post asked why churches with bell towers were not given the same exemption to ring their bells during Easter? One response from the Mayor’s account answered: “I would have agreed if a similar request had been made by a church or any other faith group.”

Both petitions were pulled down by the online petition website two days after the Mayor’s announcement. A third petition has since surfaced on another website.

Only one Coptic political figure, Hani Tawfilis in Mississauga, commented publicly on the issue. This is not surprising. Ghada Melek, a candidate who ran for the Federal Parliament seat of Mississauga – Streetsville had come under fire for her controversial comments in 2019, when she led a campaign to stop a Muslim organization’s bus ads. The ads were part of an awareness campaign that compared veiled Muslim women to the Christian figure of Mary. Melek, among other Coptic leaders, was also a key organizer in occasional protests held following sectarian-related attacks on Copts in Egypt. Such protests, and their related chants and signage, highlight incidents of violence against Copts and the loss of religious freedoms in Egypt while warning of the same spreading in Canada.

Despite prevalent inter-religious divisions due to fears of sectarian violence among the Copts, there is a growing number who disagree with negative assessments of the recent motions during COVID-19 lock-down. Many dissenting Copts took to social media to both express the oppression their community continues to experience in Egypt and to also acknowledge that their Christian faith is privileged in Canada. Of course, their opinions and perspectives are not homogenous. Among the supporters of the motion, some have come forward to condemn anti-Muslim narratives in their community. They articulate how Canada offers opportunities for living in peace and respect with their Muslim neighbors. Importantly, one such opportunity is the ability to shed any “baggage” they or their families may have carried with them from their homeland. Some have posted their comments publicly on the Mayor’s page. 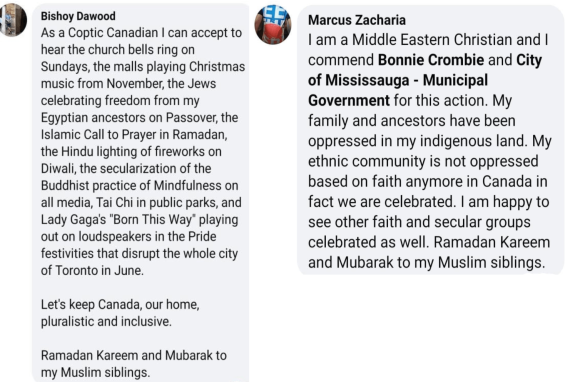 The Ayoub Sisters, a UK based strings duet popular among Copts, are also moving in this direction. They produced a music video called “Call to Prayers: A Message of Unity”, where they mix a classical version of the Muslim Call to Prayer with Coptic music in a harmonious way. The video showcases photos of Coptic and Muslim leaders together and espouses a vision of unity.

It is time for Coptic communities to build new and hope-filled relationships with their Muslim compatriots in Canada, even if these efforts may mask systemic discrimination in Egypt. This an opportunity to trump hate and Islamophobia and to build solidarities across shared experiences and challenges, in order to live together in harmony.

We encourage everyone to exercise caution, social distancing, cough etiquette and self-isolation as needed. Egypt Migrations is always looking for people to contribute to our digital initiatives. Please contact team@egyptmigrations.com if you would like to support the organization.

Progressive Copts is a platform that aims to explore, complement and converse with mainstream Coptic Orthodox narratives. It explores questions of belonging, inclusion and reconciliation for Copts outside Egypt. You can find them here.